Stockholm’s largest infrastructure project, Stockholm City Line, was completed in 2017. It started in January 2009 and the work on installations for the tunnel’s ventilation systems began four years later.

The project’s tunnel has been excavated about 30–50 metres under central Stockholm, and Bravida has provided all ventilation system installations. The tunnel is six kilometres long and the purpose is to faciliate the Swedish capital’s previously limited rail capacity. 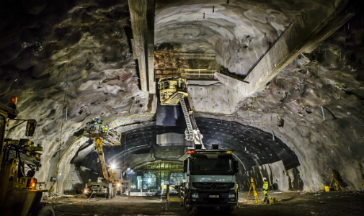 The tunnel, which opened in July 2017, takes Stockholm commuter rail traffic through the city, making the journey both faster and more efficient for the passengers. Through the Stockholm City Line it is not only a huge number of people travelling everyday, but also huge volumes of air. The air quality requirements are stringent, and are significantly higher than those for the city’s metro system. This required Bravida to break new ground in this ventilation project.

In addition to permanent ventilation for the entire Stockholm City Line tunnel system, the work has also included regular and fume ventilation during the construction.